So today let’s talk about the boy’s room. The room is 12 x 15 and will be shared by my older two boys. If you regularly read the blog than you’ve seen pictures of it while under construction…but here they are again (mostly to remind me that we’ve already come a long way and aren’t just beginning…because it’s true, but I forget). We have been in the new house for a little over a month now, and here is what the boy’s room looks like today. It’s nothing exciting, but it’s functional and probably the most put together room in the house. They have their bunk beds, the rug and some stuff from their old room, plus the toy box and Lego table that were in our living room. I also added some curtains and curtain rods to make it feel more like a bedroom…though I had no idea what direction the room was headed, so I chose sheers so I can layer them later.

The newest addition is this adorable metal table and chairs from Better Homes and Gardens at Walmart. I went to the BHG headquarters this summer for a blogger event and saw some of their new products, and this set was my favorite thing of all. It’s stylish, the perfect size, and very affordable. You can buy the table and chairs separately and they come in a few different colors (white, black, red, and blue). They use it all the time for coloring and crafts (my toddler especially likes having something his size), and they recently discovered that it’s magnetic…which makes it the best Magformers table ever.

Now, I never intended to make the kids room a priority in this house, there are plenty of rooms that I want to finish WAY before even thinking about a kids room (like the kitchen and the master, for example). However, the front bedroom is the only room in the house that is ready to decorate…all the other rooms need ceilings or cabinets or other very basic elements before I can even think about decorating them. So while we are definitely working on those rooms, they are also not something a 35 week pregnant lady can work on by herself. But I can paint walls, shop, and arrange stuff in a room….so that’s what I’m going to do.  And I’m kinda excited about it.

So if you remember, in the last house the boys had a cowboy themed bedroom. As we were packing and moving last month I asked the boys (who are 6.5 and almost 5) if they wanted to keep the cowboy bedroom or do a different theme. They both said they wanted to keep the cowboy thing going on…but I just couldn’t shut my mouth and kept prodding. “Are you sure?” I said “because we could put the cowboy stuff in Judah and the new babies room and y’all could pick something different…like dinosaurs, ninjas, animals, construction….”.

I think naming the other possible themes is what got them, because it was suddenly like a word dam broke and little boy jibber jabber was flooding my ears. Eventually I got them to stop talking long enough to give them the rules, which consisted of “you can pick whatever you want, but you have to agree. So go talk about it and come back and tell me when you’ve made a decision.”

Then I made the mistake of saying “Cool, lets look at some pictures of underwater bedrooms on the computer!” Then they got mega excited, saying that they DEFINITELY needed to have sharks painted on their ceiling and boat beds….to which I pretty much guaranteed them that was never going to happen.

I want something with a very neural base, something that I can easily change in a few years when they decided that they no longer want an underwater bedroom. I will not painting a murals on the walls (not like I could anyway) no matter how much they beg. They can have fun choosing the accessories and stuff that is easily changeable, but I get the to create the base of the room.

So here is what I came up with… I started out by looking for a fun octopus/squid/jellyfish fabric, and after 100 that I hated I finally ran across this one and LOVED it. 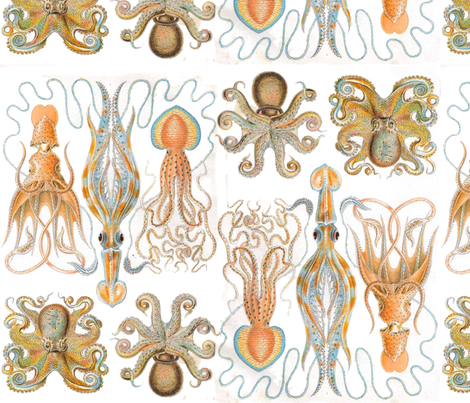 It’s fun and exactly what they wanted, and most importantly it’s not a mural doesn’t look like it belongs in a nursery. My plan is to adhere it to the wall, floor to ceiling, in two strips behind the beds (like a big headboard). The walls will be painted Silvermist by Sherwin Williams, which is the same color as our master bedroom and office nook. It fulfills their request for blue walls and mine need for a neutral-ish base (plus I have a few gallons of it leftover). I also plan on selling the bunk beds and exchanging it for two twin XL’s.  We only bought the beds a couple of years ago and they worked great in the boys previously tiny bedroom…but I’ve come to hate them. It’s impossible to change the sheets, and since they are contained on three or four sides they end up just being filled with toys, and stuffed animals, coloring books, water bottles, and anything else my kids decide to bring into bed with them. I can’t wait to ditch them.

The curtains will be a neutral boring fabric (because I don’t want them to distract from the cool sea creatures fabric) and a jute rug will go on the floor, since it’s also neutral and fulfills their request for a floor that looks like sand. The netting is something I came up with since they really wanted something on the ceiling. I figured I could buy a bunch of it and cover the ceiling, it would be easy, cheap, temporary, and my kids think it’s awesome….the perfect combo. After I get all my basics in I’ll give my kids a say again and let them choose some fun accessories.

Anyway, that is my plan for the boy’s room. I think it’s a good compromise and we are all excited to get started!